It’s not long until Christmas! Time to experiment with some alternative nutritious nibbles for everyone.

We all know that you are what you eat. Would you rather be made of pre-packaged, sugar filled, artificial snacks? Or natural, healthy, filling and delicious treats?

I know what I’d rather be made of….

So here is the recipe for some very delicious and nutritious Christmas themed treats!

I am not a very accurate measurer, so this recipe mostly uses ‘handfuls’ and ‘some’ as guidelines! Basically, if you want more, use bigger amounts, if you want less…. Use less!

The sort of amounts I used made 5 or 6 balls that were bigger than a conker but smaller than a golf ball….

– Pinch of pink Himalayan mountain salt (or whatever salt you have!)

– 5 prunes (stones removed!) or dates…. I could only find prunes in my house at the time, but at least they’ll keep you ‘regular’ if you know what I mean….

– Zest of an orange

– Pinch of nutmeg and allspice

– You can add a couple of little spoons of honey, although that doesn’t make these strictly vegan anymore

For the top decorative part:

– Icing sugar and lemon juice mixed until it looks like there’s enough (obviously these will be healthier without the icing sugar but they won’t look very Christmas pudding-y and it is only a tiny amount of sugar.)

– Chopped cherries for the berries

– A little bit of a mint leaf for the holly

–        Put the nuts, coconut pieces and salt in a blender or food processor and pulse until they’re all finely chopped.

–        Add the carrot, dried fruit, orange zest and all the spices and pulse again until everything is finely chopped and starting to come together

–        If you’re using honey, add it now. If your mixture isn’t sticky enough without the honey, add a couple more dates or prunes

For the decoration on top:

Put these in the freezer to set for a little bit and then they’re ready to eat! 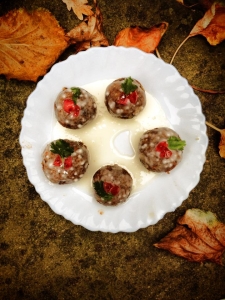