Having been one of the organisers of this year’s Brighton Yoga Festival, which raised money for two local charities, I got the chance to meet many incredibly kind and passionate people, all of whom care about spreading the word of yoga in order to help others. The festival was a huge success and I’m so grateful to have been able to teach a class on the main stage with the very talented DJ OM Nebula providing beautiful music. Pink Namaste helped to fund the festival, and were there raising awareness about their fairtrade Yoga products. Through Pink Namate, I met Diego Barraza, the director of Part & Parcel who introduced me to his documentary. If you’re interested in learning more about Yoga and what it really means, then this is a film definitely worth watching. Read on to find out more….

As I am the festival’s website & blog editor, you’ll find this article featured there, too! 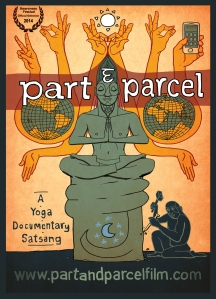 As the word Yoga is becoming more and more mainstream, with classes springing up in gyms and new studios opening on every street corner, there’s no surprise that the origins of the practice can sometimes be forgotten in favour of the physical aspect.

Is there more to Yoga than we currently find in those gyms and yoga studios throughout the western world? Of course there is, but sometimes it’s hard to imagine there is; with the growing focus upon physical appearance, ‘the yoga body’, more and more Yoga offshoots, and the popularity of athletic Yoga clothing brands. What happened to the essence of devotion, awareness of ‘something bigger than ourselves’, and the idea that Yoga doesn’t have to be all about the physical practice? It is puzzling to many, that a system designed to release our attachment to the ego has somehow begun to reinforce our sense of ‘I’, ‘me’ and ‘mine’ with the likes of Instagram and Youtube enabling others to present their siddhis or ‘yogic achievements’ to the world, inadvertently encouraging us to compare and contrast ourselves with others.

We learn through Part & Parcel, that Yoga is in fact an ancient system, thought to possibly date back around 3000 years. Ancient civilisations meditated and practiced Yoga, but not the Yoga we know today. Our physical system of Yoga is actually closer to – and was heavily influenced by – European and American gymnastics in the 19th century. It is the intention however, that has stayed consistent for so many years, proving that this need to yoke (which the term Yoga actually means), to unite and to connect is inherent within all human beings.

It is Director Diego Barraza’s connection and unity with others that proved to be a major reason as to why he decided to make the documentary in the first place; “Part & Parcel, a Yoga documentary Satsang” was a project born of the experiences and personal connections that developed as I began practising Yoga, first in Spain and then in the UK. I had common notions of its history and practice, but as I attended one of the talks given by the British scholar Matthew Clarke, a whole universe that was unknown to me began unravelling. As ideas and people began to align, I started meeting other characters with great knowledge and special personality and I knew there was a documentary film to be made”. Diego grew up in the midst of a bloody civil war conflict in the Central American nation of El Salvador, and says that in those circumstances, you were expected to make do and be grateful for what you had. This ability to creatively use limited resources helped Diego become the filmmaker he is today. He says that rather than rigidly planning documentaries, he is “more inclined to put my intention out and manifest along the way”. With support from Pukka Herbs (the well known organic herbs company), Pink Namaste (a fairtrade business specialising in yoga clothing, accessories and more), and a well received crowd funding appeal, Diego is able to now make manifest the documentary he hopes will “encourage people to take on the personal quest for an individual holistic change and why not … greater social change”.

I was immediately drawn into Part & Parcel from the outset, as the depth of philosophical enquiry is rich and varied. Patanjali’s Yoga Sutras and the Eight Limb Path of Yoga is a widely recognised aspect of Yogic philosophy, and we find out very soon that asana is just one very small aspect of this concept of Yoga. The Yoga Sutras only

actually mention asana about twice throughout the text, and it is just one part of a very important path leading to Samadhi, ‘bliss’, ‘enlightenment’ or ‘realisation’. Before asana, we’re presented with Yama and Niyama – two important limbs of the yoking process. The five Yamas comprise of ahimsa (non violence), satya (truthfulness), asteya (non stealing), brahmacharya (celibacy or right use of energy), and aparigraha (non jealousy or non covetousness). These aspects guide us towards building a more positive relationship with the world around us, while the Niyamas provide a guide as to how to act towards ourselves: Saucha (cleanliness), santosha (contentment), tapas (discipline), svadhyaya (self study or self enquiry), and isvarapranidhana (surrender to God).

Traditionally, aspiring yogis would go through rigorous cleansing techniques long before they even thought about practicing asana. As Swami Bhakti Gaurava Narasingha says though: ‘Try selling that!’. It wasn’t until public classes were introduced in Mysore – which unusually allowed women to attend – that the more commonly thought of ‘Yoga class’ came to exist. These classes often left out the more extreme practices in favour of making the practice more accessible, and ultimately diluting the traditional Yoga practice a little.

Part & Parcel seeks to discover if Yoga is considered a religion, a fitness fad, a scientific discipline perhaps, or something else entirely. Swami Bhalti Guarava Narasingha suggests that ‘Yoga is the science of consciousness’, and Dr. Matthew Clark’s view is that ‘The essence of yoga is to find out, to conduct experiments on yourself’. So what happens when we experiment? We find things out, we reach conclusions and we theorise things. We discover and uncover truths about ourselves and the world around us. It is these discoveries and truths that BNS Iyengar says we must share; ‘If you have become a yogi, that yoga must be taught to another person… he must give his knowledge to his disciple’. Is this why there are so many Yoga teachers emerging

today? Is this why countless Yoga studios are popping up in towns and cities across the world? Is this why the practice has survived for centuries? Perhaps we already know this – the aching desire to share what our practice teaches us. Yoga cannot be kept and locked away for one person’s own benefit; this powerful practice has a life of its own and simply cannot be contained. It is perhaps our duty to share what we experience, and maybe this is how it has survived for so long.

Personally, this documentary was a welcome reminder of why I teach the way I do; as a yoga teacher, it is my passion to help others use the tools we learn in a yoga class in our every day lives; the ability to be in the present moment instead of in the mind, and to realise that real happiness comes from deep within – not from anything material or external to us. Yes, I love a physical practice, and yes, I love to teach a dynamic style of asana, but in the end – our real Yoga practice happens off the mat. In modern society, when we’re bombarded with photos of ‘perfect’ yoga bodies, and more and more yoga classes geared towards providing a ‘workout’ for students, I find it’s more important than ever to ask the question ‘Why do I practice?’. It’s the experimentation of physical yoga that inspires and excites me, but if this practice is going to last a lifetime, then it needs to be more than asana. Part & Parcel is a documentary I can see myself returning to over and over again, and sharing the knowledge contained within it, with those who want to go deeper than what we may find in a modern Yoga class.

The question is, will others listen to what we have to say? Will Yoga continue to evolve into a mere fitness fad, or will we be able to retain the roots of this ancient and sacred tradition? Many documentaries track the development of physical yoga practices, but Part & Parcel dares to shed light on the often overlooked and yet essential aspects of our practice…. And perhaps this is how the Yoga tradition will stay alive for another 3000 years. This is a documentary to further anyone’s knowledge and appreciation of Yoga, and will spark conversation and interaction, with the ability to unite minds, hearts and communities.

Part & Parcel has been officially selected to screen at the Awareness Film Festival 2014 in Santa Monica, LA where it will have its US premier between the 15th and 21st of September. In the UK, the world premier of the film will take place at ZU studios in Lewes on September 13th.

To find out more about Part & Parcel, head to www.partandparcelfilm.com