There are certain deities which are looked to at the beginning of a new year in order to bring about a positive beginning to the time that lies ahead. It’s a common misconception that the Hindu gods and goddesses are there just to be worshipped – they’re actually figures which exist in order to teach us valuable lessons, help us grow, and realise our own potential.

Of course, no one is expecting us to believe there are literally physical gods and deities with thousands of arms, animal heads and the power to change our lives; it’s about what these figures represent.

For example, deities like Kali, Durga and Lakshmi, are all shown with a multitude of arms to represent their multiple abilities, super-human powers, and potential to do many things at once, while almost all male deities are shown with two arms, as they usually have just one specific task (it’s true that women have pretty much always been considered better at multitasking, then….). The multiple hands are usually holding multiple objects, which are all highly symbolic. (A lotus represents purity, while something like an axe represents cutting all bonds of attachment we may have to those things that don’t serve us.

Multiple faces represents multiple personalities and qualities, and each deity is also often seen riding upon a ‘vehicle’ represented as an animal, which again has deeper meaning.

Throughout the month of January, we’ll look at some of the deities revered traditionally at times of new beginnings, journeys and projects, and how we can invoke them to lead us towards our fullest potential in 2016.

The elephant-headed deity Ganesh – also known as Ganesha, Ganapati, (and about 108 other names which you can find here) – is one of the most widely known and revered deities, due to the qualities he represents.

Ganesh is the ‘remover of obstacles’, and people would often pray or chant to him at the beginning of long journeys, important events, beginnings of a new time of year, and at the beginning of important projects. He’s the patron of arts, sciences, and writing, and is considered the god of prosperity, luck, wisdom and learning.

If you’re setting a new year’s resolution, Ganesh is the deity to call upon to help remove any ‘obstacles’ from your path in order to help you achieve that resolution, and to make the year ahead run a little more smoothly.

There’s one catch though – of course, nothing is ever simple in this whole Yoga thing – Ganesh doesn’t just remove obstacles, he also places them in our path to help us learn to overcome difficulty and grow. We’ll never grow into our fullest, strongest, wisest selves if life is always easy anyway, would we?

Think of it a little like ‘tough love’. Ganesh wants us to be the best we can be, but he won’t do everything for us, we have to learn to remove the

obstacles ourselves sometimes. Once we’ve learned how to do something ourselves, this knowledge becomes wisdom, and we’re then able to teach and share with others, so all challenges and difficulties we may face are very valuable things.

When invoking Ganesh, it’s important to recognise that all obstacles we’ve faced before have lead us to the very place we are right now, and helped us become the person we are today. We then ask Ganesh to give us the ability to overcome any objects we may face on life’s path. The elephant head of Ganesh has come to represent stability, power and strength, so that no matter what life throws at us along the way, we’re able to remain strong and remove the obstacles ourselves, without the need to rely upon external help from others or from the material world.

If your new year’s resolution is to cut down on drinking, quitting smoking or to eat healthier, then this could mean something as simple as having the strength to overcome a difficult situation we face throughout the week without the need to turn to that external thing we relied on beforehand – that drink, cigarette or unhealthy snack.

If we find something a little bigger and more challenging to deal with on the path, Ganesh helps give us the emotional strength and courage to work through it and learn along the way, eventually clearing our own path of obstacles. That’s the thing about clearing things ourselves – we often put obstacles in our own way to begin with anyway, don’t we? Doubt, insecurity, laziness; these are often three things that stop us from reaching our potential, but no one has the ability to put then in front of us but ourselves…. It’s not Ganesh holds the power to clear our path, its us.

Questions for meditating upon: Am I placing obstacles in my own path? How am I creating blockages for myself? And how can I remove them?

“Your task is not to seek for love, but merely to seek and find all the barriers within yourself that you have built against it”
~ Rumi

As I’ve said before; Yoga is about remembering and returning to our truest, most natural selves, – that’s the journey and the path we’re on. The practice is about removing the obstacles on the path and overcoming the challenges along the way.

First of all, look at a picture of Ganesh so you can visualise him in your mind when chanting. 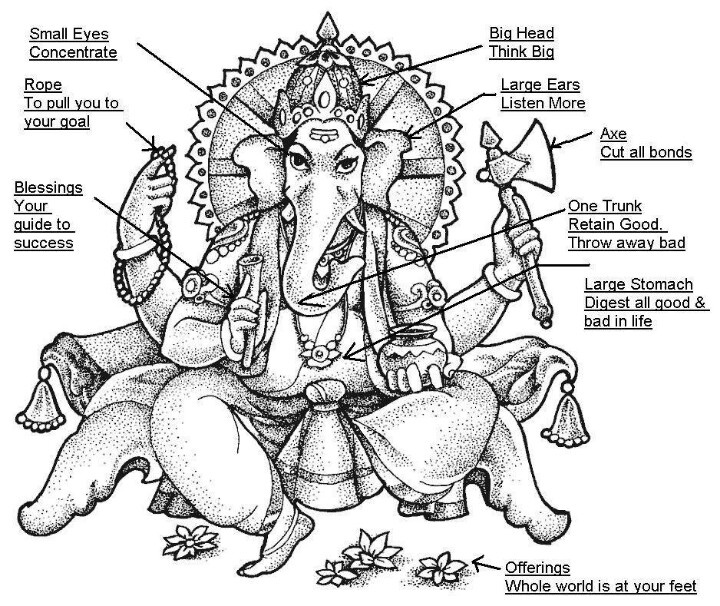 A Ganesh chant can be memorised and repeated throughout the day either in silence or out loud. They are used to ask for protection and guidance from Ganesh. There are many instances in which people I know have been stuck in traffic jams or facing public transport difficulties and have actually had all difficulties removed after chanting this mantra!

Happy new year, may your path ahead be clear and may you have the power and strength to overcome any obstacles you face.

3 thoughts on “New Year Deities: Clearing The Path With Ganesh”