‘The only thing that is constant is change’  Heraclitus

Life is movement. The exchange of an inhale and exhale, the beat of the heart as it pumps blood around the body, the movement from day to night and back to day, the cycle of the moon, the movements of the mind from ‘happy’ to ‘sad’ and every possible thing in between, and the life changes we encounter like birth, relationships, big events, small events, love, loss, and death (and re-birth if you’re inclined to that way of thinking)….

It’s exciting, it’s tiring, it’s infuriating and confusing, it’s beautiful and ugly all at the same time, but as much as we may want (or not want) things to stay the same, they’re always in a constant state of flux or transformation, also known in Sanskrit as ‘parinamavada’. ‘Pari’ means ‘to turn’, and represents life’s constant turning from one moment to the next. 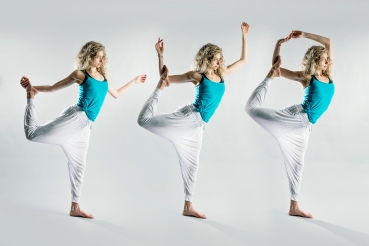 It’s usually when we become stable, comfortable, and satisfied that change scares us the most. If we’re rooted in a life that provides everything we need and allows us to coast along, this may seem like it could only ever be a good thing – but remember; there is such a thing as ‘too much of a good thing’. The more we have, the more we have to lose, and the more we’re provided with comforts, the more fearful we become of experiencing discomfort. This is why one of the most valuable aspects of Yoga is the teaching that in order to find true freedom, we must let go of all the things we’ve become ‘attached’ to, and see what life is like when we allow ourselves to move from moment to moment without dwelling on what just happened, or what might be about to happen next. No lamentation, or expectation, life happens now, not yesterday or next week….

Accepting life as it is served up is a lot easier said than done, but no one ever said Yoga was easy…. Impermanence is an aspect focussed upon in the Buddhist and Indian Tantric traditions, and it’s embraced in order to overcome the fear of change, and ultimately the fear of death. When we realise that everything around us – including this body – is impermanent, we begin to appreciate life a little more and live it more fully, no matter what it brings.

Many the Gods revered in Hinduism and Yogic mythology aren’t there to make us feel safe and comfortable and allow us to coast through life; in fact they’re all about showing us that in order to grow, we first have to overcome something. There’s no hiding away – we are required to step up in each moment and say ‘yes’ to life.

Often revered as ‘the destroyer’, or more accurately ‘transformer’; he’s all about destroying the ego and creating space for transforming ourselves from ignorant to enlightened. Shiva is often depicted as wild; banging the ‘drum of creation’ and some images show him dancing on bodies in a graveyard to depict overcoming the fear of death. It’s important to recognise that in order for something to be created, something else must be destroyed. The world we experience is all down to the state of our minds, and in order for a new world to be created, an old one must be destroyed….

The elephant-headed god is known as ‘the remover of obstacles’, but Ganesh doesn’t just take obstacles and difficulties away for us, he helps us overcome them in order to grow. Ganesh does indeed help us overcome things we face on our path, but he’s also responsible for placing objects in our path, once again creating a situation for us to overcome, grow and learn from.

Revered by many; you may not expect for Krishna also to be depicted as ‘a thief’ or ‘prankster’. Instead of leaving us to sail through life, he’s thought to play ‘tricks’ on us, essentially pulling

the rug out from under our feet, keeping us on our toes and in a state of continuous growth. Again, this is to show us that the gods respected by so many are not there to provide mere ‘comfort’; they provide ways for us to grow, transform, and reach our highest potential – which doesn’t come easy!

Lila: The Play of Life

Embracing change and continuous transformation is viewed by many as ‘a dance’ or ‘a play’ of life. The word Lila in Sanskrit doesn’t have a literal English translation (Sanskrit words contain ‘the essence’ or ‘feeling’ or a word, not a description), but the closest we can get is ‘the play of life’. Each part of life is part of a play, the trick is not to get caught up in the drama….

Just the same as when your Yoga teacher may ask you to ‘observe thoughts’ without getting caught up in them (again, easier said than done!), we can observe the ‘play’ or ‘dance’ of life without getting caught up or attached to one moment or the next, but instead embracing life as it comes, in all its fullness, thus allowing us to live life more fully from beginning to end.

‘Many people are afraid of death, but they never ask themselves whether they have yet truly begun living…. Death during life is far more tragic than death at the end of life.’ – Words spoken by an ancient Rishi, from The Dharma Code by Simon Hass

3 thoughts on “Impermanence: It’s Time To Get Uncomfortable”